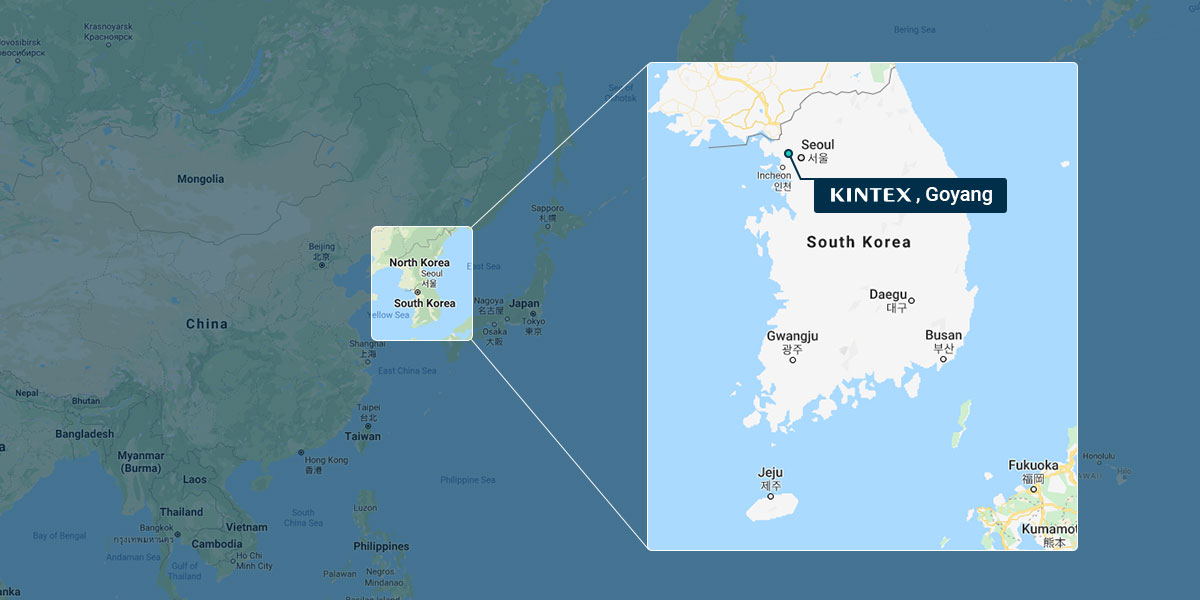 The Republic of Korea is a small country on the far eastern edge of Asia. It covers a total area of 99,392 square kilometers and has a population of 50 million. The capital and largest city is Seoul, with a population of 10 million. Although it ranks 109th in the world in terms of land area, the country is a center of economic activity, culture, and arts. Korea had to endure the Korean War (1950-53), but it has achieved amazing economic growth in a short period, dubbed "the Miracle on the Han River".

Korea has four distinct seasons, with each offering unique and beautiful landscapes. In the spring, forsythia, cherry blossom, azalea and many other flowers are in full bloom; in the summer, people travel in numbers to the coasts to enjoy their vacation on the beach; in the fall, the mountains put on a fascinating coat of crimson leaves; and in the winter, the land is covered with snow. The capital of Korea is Seoul, and the government is led by Moon, Jae-In, elected in 2017. The Korean economy is driven by the manufacturing and exports including ships, automobiles, mobile phones, PCs, TVs, and other electronics to countries all around the world. Korea has enjoyed rapid economic growth thanks in large part to its export-focused strategy. Today, the nation boasts the 15th largest economy in the world. Recently, Korean dramas and movies are also widely exported thanks to the popularity of Korean pop culture. K-pop stars are also active on the world stage.

Geographically, Gyeonggi-do surrounds Seoul, the capital city of the Republic of Korea and is the center and the economic hub of the country. With two airports and two ports, it allows easy access to any city in Northeast Asia within two hours. Gyeonggi-do is where the tour in Korea begins. From prehistoric times through Baekje, Goryeo and Joseon Dynasties, which had maintained the royal road through the region, Korea’s leading industries like IT, auto industry and tourism have flourished here. 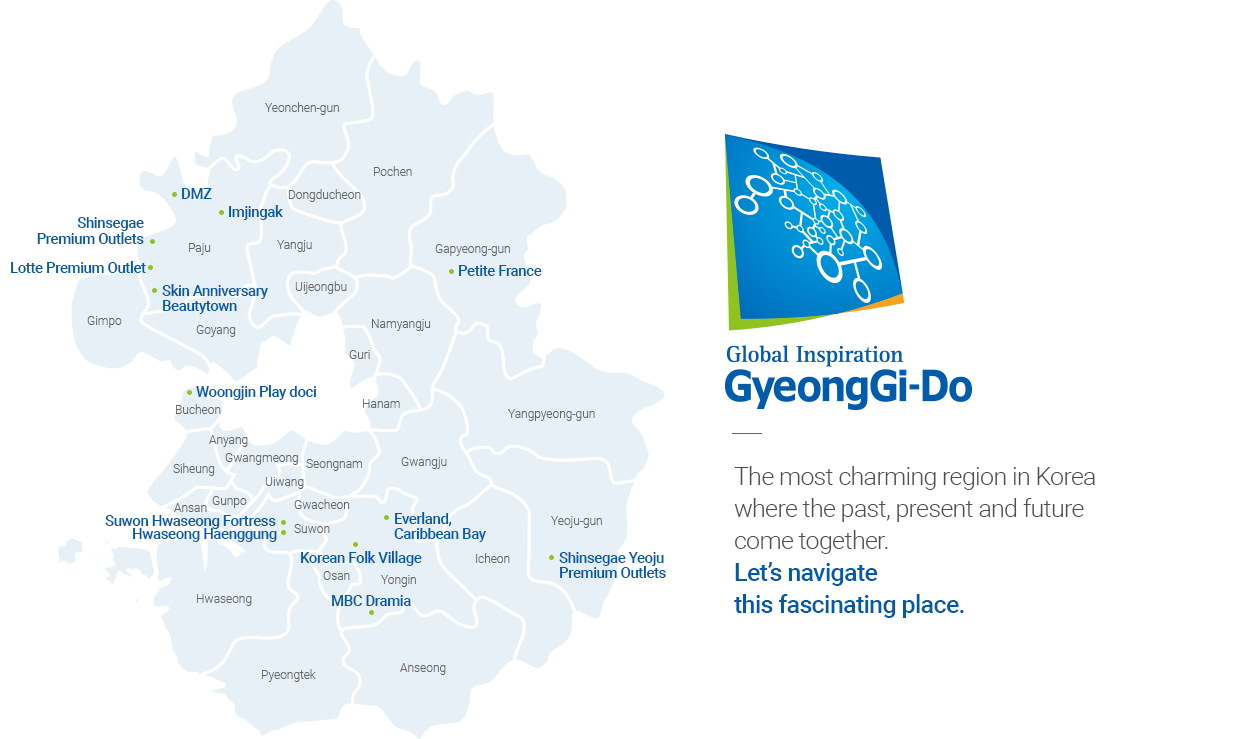 ‘Gyeonggi’ means ‘outer land of kingdom’s capital’ and is to protect the royal palace. Since 1018 (Goryeo Dynasty) when the name was first used, the province has long been specially treated as the area guarding capital of kingdom. It is why you can find Suwon Hwaseong Fortress and Royal Tombs of the Joseon Dynasty here. Suwon Hwaseong, the masterpiece of the Joseon Dynasty, is one of the finest Asian fortresses. It was scientifically designed based on both Asian and Western military science theories and the oriental philology of ‘fi lial piety.’ Passing through the downtown area of Suwon, the fortress is one of the popular tourist destinations; it works off the charm of Gyeonggi-do where tradition and modernity are balanced. Registered recently as a World Heritage by UNESCO, the Royal Tombs of the Joseon Dynasty is attracting worldwide attention. It’s very rare in the world that a single dynasty existed for 519 years and it’s extraordinarily hard to maintain the tombs of kings and queens in that excellent state. UNESCO, impressed with their artistic and historic value, came to designate all of 40 tombs as the world heritages. 31 out of the 40 tombs lie in Gyeonggi-do. Based on this valuable cultural heritage, the province has become the center of Hallyu, or the Korean Wave.

Dae Jang Geum, an advance guard for Hallyu dramas that has been on a roll in Japan, China, Middle East and Southeast Asian Nations, was shot at Hwaseong Fortress in Suwon and Korean Folk Village in Yongin. Invested and managed by MBC, one of the major broadcasting stations in Korea, the Yongin MBC Dramia is bustling with a lot of foreign tourists since it was the location of Dae Jang Geum, The Moon That Embraces the Sun and The Great Queen Seondeok. Indeed, Gentleman, the music video of Psy, which recorded the big global hit in 2012, was shot at the Onemount in Goyang, and some episodes of Running Man of SBS that are popular in Southeast Asian Nations were shot at the Onemount and the Petite France in Gapyeong.

Everland was ranked as one of four major theme parks by Forbes in 2006. Located in Gyeonggi-do, it is one of the most impressive tourist attractions in Korea with nine million visitors annually. Apart from Everland there are many exciting theme parks in the province such as Gwacheon Seoul Land, WoongjinPlacydoci and Onemount. The Korean Folk Village, which features Giwajip (mansions of Yangban, aristocrats in Joseon Dynasty) as well as Chogajip (rice straw-thatched house), is one of world-class tourist destinations you can experience a variety of Korean traditions and cultures. For foreign tourists, in particular, it is a must-see destination since Nongak (a rural form of Korean percussive music),Jultagi (tight-rope walking) and Korean traditional wedding are performed all the year round. WoongjinPlaydoci, opened recently in 2009, fits out the world’s 12th indoor ski slope and offers advanced technology and services.

One and Only Place on Earth; DMZ

The DMZ (De-Militarized Zone) is a natural tourist attraction. The world’s only active strip of division, DMZ has recently come to be regarded as a great ecological tourist spot with exquisite natural resources. Many people including children and world celebrities have visited the DMZ, which has been cut off from the outside world for half a century, to discover the importance of nature and to hear a true message of peace.

The Korean Peninsula extends southward from the northeastern part of the Asian continent between latitudes from 33 to 43 degrees north, and longitudes from 124 to 131 degrees East, The standard meridian of the peninsula is 135 degrees, 9 hours ahead of GMT. The Amnok and Tuman Rivers border both China and Russia to the north and Japan lies just across the East Sea.

Koreans, like many other Asian peoples, are descendants of Mongolian Tungus stock. However, they differ from their neighbors, the Japanese and Chinese, in that they are a homogeneous ethnic group with their own language, culture, and customs. Korean people are characterized by their generosity, warmth, and kindness, and are renowned as one of the hardest working peoples in the word. For further information, please visit at http://english.visitkorea.or.kr/enu/index.kto.

The Korean language is classified as a Ural-Altaic language, a group which also includes Mongolian, Hungarian, and Finnish. The Korean character system, Hangeul, is completely different from Japanese. “Hangeul” was developed by a group of scholars under the patronage of King Sejong in 1443 of the Joseon Dynasty.

Korea lies in the temperate zone and has four distinct seasons, In late March or early April, the trees burst into leafy splendor to mark the beginning of spring. Mostly sunny days can be expected from March to May. During the relatively hot and rainy summer season, the vegetation is lush. By June, the average temperature is over 20℃ (68℉).

Monsoon rains usually begin around the end of June and last until mid-to late-July. August is hot and humid. The coming of autumn in late September brings continental winds and clear, dry weather, making the fall months perhaps the most pleasant time of year. October’s vivid golds and vibrant reds create a colorful panorama.

December to February is cold and dry with occasional snow. During the winter months, three or four days of cold weather are often followed by a few warmer days.

The electricity supply commonly used in Korea is the 220-volt 60Hz system. Because most newly built hotels and houses have the 220-volt wiring installed, you are advised to check your electronic equipment beforehand.

The Korean local currency is the Won. Under the floating exchange rate system, one US dollar is 1,338 KRW as of March 26, 2009. Major foreign currencies that can be exchanged at banks, hotels, and the airport include the US Dollar, Japanese Yen, Euro, and UK Sterling. Most hotels, restaurants, and shops accept major international credit cards including Visa, American Express, Diners Club, Master Card, and JCB. Foreign-issued ATM cards may have limited use.

Travelers who carry internationally recognized credit cards can get a cash advance in Korea Won from Automated Teller Machines (ATMs) installed at airports, major hotels, department stores, subway stations and tourist attractions. ATMs are in operation 24 hours a day. Most large stores, hotels and restaurants in Korea accept major international credit cards. However it is advisable to carry some cash, since many smaller establishments and stores are unlikely to accept credit cards..

The Korean local time is 9 hours ahead of GMT with no daylight savings time.

You may rent a cell phone at the Incheon International Airport. Users can rent a handset and pay rental and call charges upon returning the phone. Applicants require identification, credit card, and a service contract (available at the booth).

Foreign nationals entering Korea are required to have a valid passport and a Korean visa issued by the Korean embassy or consular offices in their country. However, citizens from many countries are now permitted visa-free entry for a limited period under certain conditions. In order to check whether you are allowed to enter Korea without visa issuance and for other requirements, please contact a Korean embassy or consular office in your country or visit the following websites to confirm.

Countries under Visa Waiver Agreements
Nationals of visa waiver countries can enter Korea without a visa as long as the purpose of their visit is tourism or temporary visit. If they want to engage in profitable activities such as employment, they must apply for a Korean visa suitable for their purpose.

The Secretariat will provide an official invitation letter upon request. Such an invitation is intended to help potential attendees raise funds or obtain visas. It is not a commitment on the part of the organizers to provide any financial support.